He has busted his chin, went head first down the one step we have going into our rumpus room. Tim took him up to the hospital and they glued him up! He was fine and stopped crying soon as we put a bandaid on it and gave him a cuddle but then we thought we had better get him to the hospital just to check it and glad we did, they said if it was any bigger they would of had to do stitches! So my poor little boy is in the wars again, I definately think he is going to be accident prone (a bit like me when I was younger, my chin was always busted too).

I made this Gracie layout the other week but only just took a piccie of it, I used loads more Prima and the butterflies are K & Co Chipbox. The pic didn't pick up the colours that well, the layout is much better IRL:) 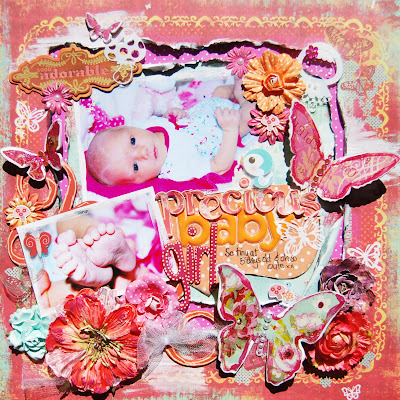 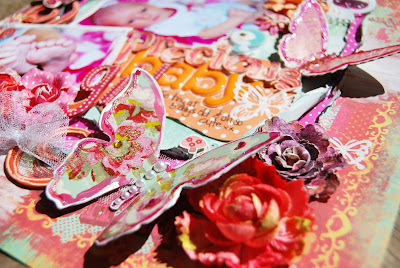 Only a couple of weeks now until we go to Perth! I am off to Kmart this afternoon to pick up some presents for Kobi for his birthday, I should really get myself organised, he will be 1 before we know it. I have made his invites just got to get all the details finalised and then get them sent.

Have a wonderful day and happy scrapping:)

OMG Stace you rock at girly LO's too!Is there nothing you cant do you clever chickie :D

OH NO! Poor little man! Jedds had a few good busters lately too. Hes walking flat out now so theres further to fall. No stitches yet though. Thank goodness. I hope Kobi isnt feeling too sore and sorry for himself.
Love the new LO Stace. Totally GORGEOUS. Love the colours.
Shell x

Poor Kobi, hugs to him. The things I get to look forward too.
WOW that gracie Lo, just rocks!! you are so talented!!
:) x

Oh no Kobi monster!! I hope you are Ok too - i bet you were a little shocked and scared!!

Love the Gracie layout - I bet Meags is loving them too! :)

gorgeous gracie layout stace!!!
and give Kobi big cuddles from me!! bet that was a scare! xox

and what a stunning Lo of gracie you have created... totally awesome!!! love all the layers and those butterflies too..and that cute clear mushroom... who makes them... love em!!!